Ideally, eggs move from the grading station to the store or store warehouse three to five times a week, depending on available storage space. Many large supermarket chains receive all their eggs at warehouses from which the eggs are distributed to individual stores. Individual retail outlets need both adequate refrigerated space in the back and refrigerated self service counters out front to merchandise eggs properly.

Sales techniques depend on the local retailer and, sometimes, the supplier. Sales are often stimulated by attractive cartons and point-of purchase displays as well as advertising and consumer education activities.

Activities of the American Egg Board help to keep consumers aware of the egg as a convenient, versatile, nutritious and economical mealtime staple.

State and regional egg promoters inform consumers through lectures, articles, recipes and demonstrations. Advertising and publicity messages help to heighten buyer awareness of the egg and its importance to meal planning.
– See American Egg Board, Grading

A soft confection made from sugar, corn syrup, egg whites and gelatin. In addition to being consumed on their own as a sweet, marshmallows are popularly used as a hot cocoa topping, an ingredient in some ice creams and a base in various candies.

A salad dressing made of eggs, oil, lemon juice or vinegar and seasonings. The egg yolk acts as an emulsifying ingredient to keep the oil and lemon juice or vinegar from separating. Mayonnaise is used as a spread, dressing and sauce and as the base for many other preparations, including aïoli, rémoulade sauce, tartar sauce and Thousand Island dressing. For food safety in making mayonnaise, cook the egg yolks and the liquid from the recipe over low heat until the mixture reaches 160°F (71°C). Then add the oil to the egg liquid mixture very slowly, so the oil can be properly incorporated.
– See Doneness Guidelines, Cooking Egg Yolks for Use in Recipes, Partnership for Food Safety Education, Raw Eggs, Salmonella

One egg of any size equals one ounce of lean meat, poultry, fish or seafood from the Protein Foods Group. Along with varying amounts of many other nutrients, one large egg provides 6.28 grams of high-quality, complete protein or about 12.6% of the Daily Reference Value (DRV) for protein.
– See Biological Value, Buying, Daily Reference Values (DRVs), My Plate, Nutrient, Nutrient Density, Protein

Just inside the shell are two shell membranes, inner and outer. After the egg is laid and begins to cool, at the large end of the egg, an air cell forms between these two membranes.

The strength of this yolk covering protects the yolk from breaking. The vitelline membrane is weakest at the germinal disc and tends to become more fragile as the egg ages.
– See Air Cell, Composition, Formation, Germinal Disc, Grading 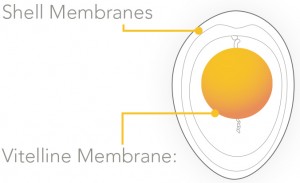 A foam of beaten egg whites and sugar. Egg foams were used in pastries much earlier, but the name meringue came from a pastry chef named Gasparini in the Swiss town of Merhrinyghen. In 1720, Gasparini created a small pastry of dried egg foam and sugar from which the simplified meringue evolved. Its fame spread and Marie Antoinette is said to have prepared the sweet with her own hands at the Trianon in France.

The most critical factor in making meringue is humidity. Because it has a high sugar content, meringue can absorb moisture from the air and become limp and sticky. For best results, make meringue on a bright, dry day.

Be sure that beaters and bowls are clean and completely free of fat or oil because the least bit of fat will prevent beaten egg whites from reaching their full volume. As plastic bowls tend to absorb fat, use only metal or glass bowls.

After separating eggs, allow the whites to stand at room temperature about 20 to 30 minutes before beating so they will reach their fullest volume.

Beat the whites with cream of tartar, using 1/8 teaspoon for each 2 egg whites, until foamy. (Cream of tartar lends stability to egg foams.) When foamy, gradually beat in the sugar, 1 to 2 tablespoons at a time. Continue beating until the sugar is dissolved and soft peaks form. (If the sugar is not completely dissolved, the meringue will be gritty. Rub just a bit of the meringue between your thumb and forefinger to feel if the sugar has dissolved).

There are several kinds of meringues, each suited to a special use. The differences are in the ratio of egg whites to sugar, the method of mixing or the method of cooking.

Used to top pies and puddings. The usual ingredient ratio is 2 tablespoons of sugar to each egg white. Beat the meringue until soft peaks form, then swirl it over a hot, precooked pie filling or pudding. Sometimes, after baking, liquid accumulates between the meringue and the filling. You can minimize this weeping if the filling is hot when you put the meringue on it. To keep a pie meringue from shrinking during baking, make sure the meringue touches the edge of the crust or the dish all around. A 3-egg-white meringue will cover a 9-inch pie.

Used as a confection or a foundation for fillings of fruits or puddings. The usual ingredient ratio is 4 tablespoons of sugar to each egg white. Beat until stiff peaks form.

You can bake a meringue on a baking sheet greased with unsalted shortening (not oil) or on a baking sheet lined with parchment paper or aluminum foil. Depending on how you intend to use a hard meringue, you can pipe it through a pastry tube, shape it gently with a spoon or spatula, or bake it in a greased pie plate, cake pan or springform pan.

Meringue baked in a pie plate forms a delicate crust for fillings, such as chocolate or lemon, and the result is often known as Angel Pie. Meringue baked in a cake or springform pan is often served with whipped cream and fruit and is called Schaum Torte or Pavlova.

Depending on the oven temperature and baking time, you can vary the texture of the finished meringue from dry and crisp to chewy. If you bake or, more properly, dry, a meringue in a preheated 225°F (107°C) oven for 1 to 1-1/2 hours until a cake tester or wooden pick inserted in the center comes out clean, it will be white, dry and crisp. For complete drying, turn off the oven and leave the meringue in the oven for at least an hour longer. Dry a shorter time to produce a chewier center. For a light golden hue, bake at 250°F (121°C) for less time or until the center is done as you wish.

You can store hard meringues for several months in a tightly sealed container with waxed paper between the layers. If the meringue loses its crispness, reheat it in a preheated 250°F (121°C) oven for 15 to 20 minutes.

Also known as Boiled Frosting and used to frost cakes, as a topping like soft meringue or as a base for frozen desserts and may also be baked like hard meringue or poached. When folded into whipped cream, Italian meringue becomes Chantilly Meringue, which may be combined with fruit as a filling for cream puffs or used as a frosting. To make Italian meringue, beat hot sugar syrup into beaten, cooked egg whites.
– See Raw Eggs

To poach, drop the meringue mixture by spoonfuls onto simmering milk or water and simmer, uncovered, until firm, about 5 minutes. You don’t need to turn over smaller spoonfuls but large ones may require turning halfway through the cooking time. Remove the poached puffs from the liquid with a slotted spoon and drain them on absorbent paper. Chill the poached meringues until you serve them.

Incredible edible eggs, nature’s own convenience food, and the microwave oven add up to quick and easy meals with a minimum of clean up. Despite all its attributes, though, the microwave oven doesn’t do justice to airy soufflés or puffy omelets. These dishes need the dry heat of a conventional oven to puff beautifully.

For successful eggs in the microwave, keep these few points in mind:

Egg yolk, because it contains fat, tends to cook more quickly than egg white so omelets, scrambled eggs and dishes where the eggs are beaten cook more evenly in the microwave oven than do other egg preparations. They can also be cooked using full power (HIGH).

Size of eggs matters even more in a microwave, when using a jumbo egg instead of a large-size egg, additional time may be needed.

Use minimum times when cooking eggs in the microwave, as they are easily overcooked. Add time in small increments, 10 to 15 seconds, to prevent overcooking. And remember, eggs will continue to cook and firm up after they are removed from the microwave.

To encourage more even cooking, cover microwave cooking containers; stir the ingredients, if possible; and, if your oven doesn’t have a turntable, rotate the dish during cooking.

Never microwave an egg in its shell because it will explode. Even out of the shell, eggs may explode in the microwave because rapid heating causes steam to build up under the yolk membrane faster than it can escape. 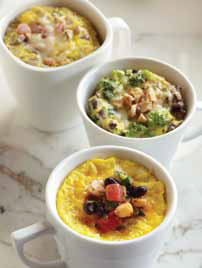 Beat 2 large eggs and 2 tablespoon water in microwave-safe bowl until blended. Microwave on HIGH 45 seconds; stir. Microwave until egg is almost set, 30 to 45 seconds longer. Season with salt and pepper.

Beat 2 eggs, 2 tablespoon water in small bowl until blended. Microwave 1 teaspoon butter in 9-inch glass pie plate on HIGH until melted, about 30 seconds. Tilt plate to coat bottom evenly. Pour egg mixture into hot pie plate. Cover tightly with plastic wrap, leaving a small vent. Microwave on HIGH 1-3/4 to 2 minutes. Do not stir. When top is thickened and no visible liquid egg remains, place shredded cheese or cooked fillings such as diced ham, crisp bacon, sautéed mushrooms, roasted peppers, caramelized onions on one half of the omelet. Fold omelet in half with turner; slide from pie plate onto serving plate. Serve immediately.

MyPlate is part of a larger communications initiative based on the 2010 Dietary Guidelines for Americans to help consumers make better food choices. MyPlate is designed to remind Americans to eat healthfully.

MyPlate illustrates the five food groups using a familiar mealtime visual, a place setting. For a balanced diet that includes all the food groups in good proportions, you can find recommendations based on your age, gender and activity level at www.choosemyplate.gov/. 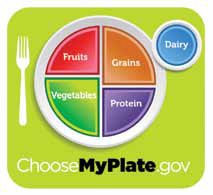