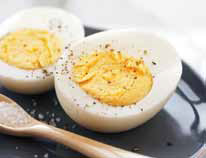 A measurement used in determining albumen (white) quality by the breakout method. The test is named for Raymond Haugh who introduced it in 1937.
– See Breakout

East Indian history indicates that wild jungle fowl were domesticated as early as 3200 BC. Historians also note that the fowl were eaten more often than the eggs, since the eggs were saved to hatch to keep the fowl in supply. Egyptian and Chinese records show that fowl were laying eggs for man in 1400 BC. Chinese described fowl as “the domestic animal who knows time”, probably due to the dependability of the rooster’s early morning call and the regularity of the hen’s egg production.Although there is some evidence of native fowl in the Americas prior to his arrival, it is believed that Columbus’ ships carried to this country the first of the chickens related to those now in egg production. These strains originated in Asia.

While the fowl referred to in the earliest histories could include a vast assortment of avian representatives, most people of the world eat, and all information here refers to, the egg of the chicken (Gallus domesticas). Nearly 200 breeds and varieties of chickens have been established worldwide, but only a few are economically important as egg producers. Most laying hens in the U.S. are Single-Comb White Leghorns.

A rich, lemon-flavored butter sauce thickened with egg yolks. The French chef who created this sauce most likely named it for Holland because Holland was famous for butter, a main ingredient in the sauce. In addition to its use in Eggs Benedict, Hollandaise sauce is often served over asparagus or poached salmon. Many other sauces, such as Béarnaise and Mousseline, are based on Hollandaise sauce. Hollandaise sauce can curdle if even slightly overcooked, so cook it over low heat, stir it constantly, and give it close attention.

In the U.S., by federal law, passed into law more than 50 years ago, neither laying hens nor any other type of poultry can be fed hormones. However, eggs contain natural hormones. Therefore, the statement “no hormones” is considered misleading to the consumer. The egg industry does not use hormones in the production of shell eggs. The FDA requires a qualifying statement on the label for shell eggs which is “Hormones are not used in the production of shell eggs.”