A concentrated source of food energy containing 9 calories per gram. In addition to supplying energy, fat aids in the absorption of certain vitamins; enhances flavor, aroma and mouthfeel of food; and adds satiety to the diet. Fatty acids, the basic chemical units of fat, are either saturated, monounsaturated or polyunsaturated.

Eggs which have been fertilized, can be incubated and developed into chicks, as long as the eggs are not refrigerated. Nearly all commercially produced eggs are laid by hens which have not mated with a rooster, so are not fertilized.

Fertile eggs are no more nutritious than nonfertile eggs, do not keep as well as nonfertile eggs and are more expensive to produce. Although fertile eggs may contain a small amount of the rooster’s male hormone, scientists believe it’s more likely that the hormone dissipates. Some ethnic groups consider fertile eggs a delicacy.
– See Germinal Disc

Eggs can float in water when the air cell has enlarged enough to keep it buoyant. This means the egg is old, but it may be perfectly safe to use. Crack the egg into a bowl and check for an off-odor or unusual appearance – a spoiled egg will have an unpleasant odor when you break open the shell, either when raw or cooked.

Air bubbles trapped in a mixture. A foam is created by incorporating air, usually by beating, and capturing the air in tiny bubbles. Eggs are excellent at foam formation. You can beat egg whites, egg yolks or whole eggs into a foam.

When you beat egg white, it becomes foamy, increases 6 to 8 times in volume and stands in peaks. When you heat the foam, the tiny air cells expand and the egg protein coagulates around them, giving permanence to the foam. Egg-white foam is responsible for the structure of angel food cake, meringues, puffy omelets and soufflés.

For egg whites that reach their greatest volume, allow the whites to stand at room temperature for about 30 minutes before beating.

Fat inhibits the foaming of egg whites, so be sure beaters and bowls are clean and that there’s no trace of yolk in the whites. Use only metal or glass bowls because plastic bowls tend to absorb fat.

Adding an acid ingredient helps to stabilize egg-white foam. The most commonly used acid ingredient is cream of tartar (1/8 teaspoon for each 1 to 2 whites) although some recipes call for lemon juice or vinegar.

Opinion among food scientists is divided on salt. Since salt may decrease foam stability, it’s best to add it to other recipe ingredients.

If you underbeat egg whites, the volume of the finished product will be less than desired. Overbeaten whites form clumps which are difficult to blend with other ingredients. Because overbeaten egg whites also lack elasticity, they can’t expand properly when heated. The finished product may be dry or have poor volume, or may even collapse.

Combine an egg-white foam with other ingredients immediately after beating, before the foam has time to drain or shrink.

An egg-yolk foam may double or triple in volume but doesn’t reach nearly the volume of egg-white foam. Beaten yolk foam is an important part of the leavening for puffy omelets and sponge cakes and is sometimes also used for soufflés.

A hen requires about 24 to 26 hours to produce an egg. After the egg is laid, the hen starts all over again about 30 minutes later.

The hen’s reproductive system consists of the ovary, the organ where the yolk develops, and the oviduct where the egg is completed. The ovary is attached to the hen’s back, about halfway between the neck and the tail. The oviduct, a tubelike organ about 26 inches long, is loosely attached to the backbone between the ovary and the tail. Most female animals have two functioning ovaries, but the hen uses only one, the left. The right ovary and oviduct remain dormant.

A female chick is born with a fully formed ovary containing several thousand tiny ova, or future yolks. The ova begin to develop, one at a time, when the pullet (a hen less than 1 year old) reaches sexual maturity. Each yolk is enclosed in its own sac or follicle. The follicle contains a highly developed system of blood vessels which carry nourishment to the developing yolk. Typically, about 30 minutes after the last egg was laid, ovulation occurs. At ovulation, the follicle ruptures to release the yolk into the oviduct. A double-yolked egg results when two yolks are released at the same time. Rupture occurs at the stigma line, an area of the follicle which has no blood vessels.
– See Blood Spots

The infundibulum, also known as the funnel, captures the ovulated yolk. The infundibulum is where fertilization, if it occurred, would take place. After about 15 minutes, the yolk passes along to the magnum where, in about 3 hours, the hen deposits the albumen (white) around the yolk. As the albumen (white) is formed, the yolk rotates, twisting the albumenous fibers to form the chalazae. Next, in about 1-1/4 hours, the two shell membranes are formed and some water and minerals are added in the isthmus. The egg has now reached its full size and shape and passes along to the uterus (shell gland) where, after 19 to 21 hours, it acquires its shell, shell color and bloom. After a few minutes’ pause in the vagina, the uterus inverts through the vagina, the cloaca (the junction of the digestive, urinary and reproductive systems) and the vent to release the egg outside the hen’s body. Laying of the egg is known as oviposition. During formation, the egg moves through the oviduct small end first. Just before laying, the egg rotates to be laid large end first. A young hen lays small eggs. The size increases as she gets older.
– See Bloom; Chalazae; Color, shell; Composition; Shell

If you have more eggs than you can use within a few weeks of buying them, you can break them out of their shells and freeze them. Freeze only clean, fresh eggs.

Break and separate the eggs, one at a time, making sure that no yolk gets in the whites. Pour the whites into freezer containers, seal tightly, label with the number of egg whites and the date, and freeze. For faster thawing and easier measuring, first freeze each white in a standard ice cube tray. Then transfer to a freezer container.

The gelation property of egg yolk causes it to thicken or gel when frozen, so you need to give yolks special treatment. If you freeze them as they are, egg yolks will eventually become so gelatinous that they will be almost impossible to use in a recipe. To help retard this gelation, beat in either 1/8 teaspoon salt or 1-1/2 teaspoons sugar or corn syrup per 1/4 cup of egg yolks (about 4 yolks). Label the container with the number of yolks, the date, and whether you’ve added salt (for main dishes) or sweetener (for baking or desserts). Freeze.

Beat just until blended, pour into freezer containers, seal tightly, label with the number of eggs and the date, and freeze.

To use frozen eggs

In a home freezer, you can freeze eggs for up to one year. When you’re ready to use frozen eggs, thaw them overnight in the refrigerator or under running cold water. Use egg yolks or whole eggs as soon as they’re thawed. Thawed egg whites will beat to better volume if you allow them to sit at room temperature for about 30 minutes. Use thawed frozen eggs only in dishes that are thoroughly cooked.

You can freeze hard-boiled egg yolks to use later for toppings or garnishes. Carefully place the yolks in a single layer in a saucepan and add enough water to come at least 1 inch above the yolks. Cover and quickly bring just to boiling. Remove the pan from the heat and let the yolks stand, covered, in the hot water about 12 minutes. Remove the yolks with a slotted spoon, drain them well and package them for freezing. 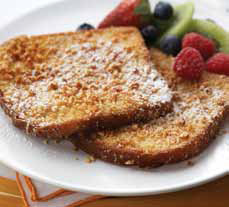 How recently an egg was laid has a bearing on its freshness but is only one of many factors. The temperature and humidity level at which the egg is held play their parts as well. These variables are so important that an egg one week old, held under ideal conditions, can be fresher than an egg left at room temperature for one day. The ideal conditions for egg storage are temperatures between 35° and 40ºF (2° to 4ºC) and a relative humidity of 70 to 80%.

Proper handling means promptly gathering and washing the eggs within a few hours after they’ve been laid. Most commercially produced eggs reach supermarkets within a few days of leaving the laying house. If you and your market handle eggs properly, they’ll still be fresh when they reach the table.

It’s a misconception that you can judge freshness by placing an egg in salt water. A carefully controlled brine test is sometimes used to judge shell thickness of eggs for hatching purposes but the test has no application to freshness of table eggs.

How important is freshness? As an egg ages, the white becomes thinner, the yolk becomes flatter and the yolk membrane becomes weaker. These changes don’t have any great effect on the nutritional quality of the egg or its functional cooking properties in recipes. Appearance may be affected though. When poached or fried, the fresher the egg, the more it will hold its shape rather than spread out in the pan. However, if you hard-boil eggs that are at least a week old, you’ll find them easier to peel than fresher eggs. The stronger the yolk membrane, the less likely the yolk will break inadvertently.
– See Storing

A pan-sized, unfolded Italian omelet in which all the ingredients cook right in the omelet. You can flavor a frittata with any combination of cooked foods you like – vegetables, grains, meat, poultry, fish, seafood or cheese. Start cooking the egg and filling mixture on top of the range until it’s almost set. Then, you can finish cooking the top of the frittata by putting the pan under the broiler or in the oven. Or you can flip the frittata out of the pan upside down onto a plate and then slide it back into the pan to cook the other side. The easiest way is simply to remove the pan from the heat, cover it and let steam finish the cooking.
– See Tortilla 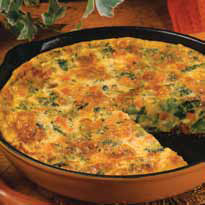